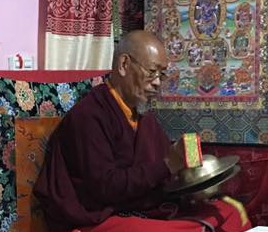 Follower of the sublime Dharma of Pacification of Sufferings (dam chos sdug bsgnal zhi byed), Au lama Tsultrim Gyaltsen from Phuggu karpo in the glorious Dhingri received the protection of Kyabje Trulshik Rinpoche and could thus enroll in Thubten Choeling Monastery at a very young age. As per the rules, he fulfilled all monastic duties and responsibilities according to the proper steps of seniority. Additionally, he served as the monastery’s main disciplinarian for seven consecutive years.

He attended upon Kyabje Trulshik Rinpoche as his chief secretary and calligrapher. He calligraphed thousands of pages of prototype texts for numerous xylograph prints, and also the master texts for Kyabje Rinpoche’s personal practices. In particular, along with Kyabje Trulshik Rinpoche, he offered his services towards the correction and proof-reading of Kyabje Dilgo Khyentse Rinpoche’s hand-written treatises, and towards the subsequent calligraphing of their prototype copies.

From Dilgo Khyentse Rinpoche, he received the entire oral transmissions for the Ka’gyur (the collection of the Words of the Buddha), the gDams sngags mzod (the “Treasury of Instructions”), the sgrub thabs kun btus (the “Compendium of Sādhanas”), the rGyud sde kun btus (the “Compendium of the Tantra Section”), all of his dGongsgter (Mind Treasure), and for uncountable teachings from all the traditions of Tibetan Buddhism. When Dilgo Khyentse conferred the gDams sngags mzod empowerment in Thubten Choeling, he had the remarkable privilege of drawing all the golden Ālikāli in the “House of Dependent Arising,” in accordance with the Zhijed tradition. On the occasion of bestowing the entire Zhijed on Au Lama, Dilgo Khyentse Rinpoche kindly composed a concise liturgy for Pha dhampa’s Guru Yoga at his earnest request. He had a very special connection to Dilgo Khyentse Rinpoche, who, in separate sessions without the presence of others, bestowed upon him many teachings that directly introduce to the rigpa¹ of Dzogchen.

From Kyabje Dudjom Jigdral Yeshe Dorje he received numerous teachings, especially the collection of treasures of both the previous and the then Dudjom. At a special request by Kyabje Trulshik Rinpoche, he received from Dudjom Rinpoche dzogchen teachings that directly introduce to rigpa in its nakedness.

So as to practice and realize the Dzogchen teachings he had received, he remained for many years in the remote dwelling caves of the previous Lama Sangye, with yetis, bears, snow-leopards, jackals, musk-deer and mountain goats. At times he would visit Kyabje Dudjom Rinpoche so as to dispel obstacles and gain enhancement in his practice, as also to undergo minute examinations of his experiences and realizations. Thus, he is now completely free from the knots of hope and fear.

Furthermore, from Kyabje Trulshik Rinpoche, he received the rNyingma ‘bka ma (the “Oral Transmission of the Nyingma”), rnyingmargyud ‘bum (“The One Hundred Thousand Nyingma Tantras”), Rinchen ‘gtermzod (“The precious treasury of Termas”), and, importantly, almost all the teachings of the Dzarong Phu lineage, following its traditional methods of oral guidance (smar khrid). In taming his flawed mind-stream, Kyabje Trulshik Rinpoche was the most compassionate: he displayed the dharma-activities of pacifying, increasing, magnetizing, wrath and supremacy, and finally blessed him into Buddha-nature. Thanks to this, Au Lama Tsulgyan had the glorious privilege of serving the Zhijed tradition by taking care of the correction and proof-reading of all thirteen volumes of the Zhijed and Chod; and also of doing the same for many more Kabums and treatises of several different teachers. Au Lama has composed the longest ever commentary to the Hundred Verses of Advice of Pha Dampa Sangye. He also served as a teacher in numerous monasteries of different schools, thus having many students.

¹rig pa (Skt. vidyā or vitti) is a key term in Dzogchen practice referring to the highest state of awareness.